Restore Your Energy with Bioenergetics

Chapter 3: The Other Half of the Story

In the last chapter, I not only explained the doubtful science around a lot of Western medicine; I also explained why pharmaceutical drugs simply are not designed to get to the root cause of a health problem. They are only designed to suppress symptoms … which sometimes is useful, even essential. But will never truly correct a problem.

Meanwhile, nutrition can address the root cause of a health problem, assuming the root cause is a nutritional deficiency. This is a better approach to truly getting well. But, like medicine, nutrition still only addresses the body’s chemistry, which often isn’t enough; and as I explained, there are still plenty of errors made through the nutritional approach. Even in its ideal, it doesn’t go deep enough because chemistry simply isn’t the basis of how the body works. It’s why medicine, nutrition, and many other options failed to get me well.

So if it’s not enough just to support the body’s chemistry in an effort to get well, what else do we need to support? What is the other half of the story? The other half is physics, as physics is what determines whether chemistry works correctly or not.

The Physics of the Body

Don’t worry; the idea isn’t complex. It just means that everything is made of energy – things like protons, neutrons, and electrons. The relationships of these energy particles are what give us atoms, and relationships between atoms and the movements of energy between them give us chemistry. So I’m just saying that physics comes first. It is fundamental. It is the root cause of anything the doctor could tell you is happening in the body.

In other words, if you could assess and correct the body’s energy system, you could in theory correct anything. And that is exactly the goal of bioenergetics.

the study, detection, and correction of energy in living systems. Correct the body’s energy system and you could, in theory, correct anything.

In fact, the science of biology already recognizes what a huge role electricity, or raw energy, plays in the body. Besides the entire nervous system being an electrical system, we’ve known for a long time that there is a strong electric charge across cell membranes. But until a study in 2007, the cellular model assumed this wasn’t the case inside the cell. This study showed that they were so wrong, it was sort of like “back to the drawing board” in terms of understanding how cells work. In fact, they “found electric fields as strong as 15 million volts per meter, perhaps five times stronger than the field found in a lightning bolt.”[1]

This emphasis on the electric or energetic nature of the body is nothing new to the world of bioenergetics; it has been studied and used to promote wellness for more than 100 years. And there are classic books on the topic like The Body Electric. Sadly, while the electric or energetic side of human biology seems so obvious and is so widely studied, modern medicine does little to address this critical aspect of how the body works, and pharmaceutical interests have actively tried to stop progress on this front. 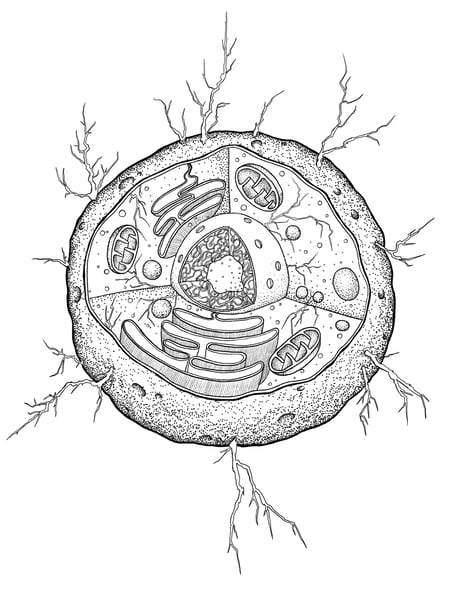 There is a strong electric charge across cell membranes and throughout the cell.

But human biology even goes beyond energy, and scientists working from a chemical or even electrical understanding of the body cannot make sense of everything we know to be true. For instance, we know that huge flocks of birds or schools of fish can operate as if they’re in complete unison, moving together not in response to one leader, but literally as a single body.

Or consider these examples from biologist Rupert Sheldrake (a biologist already looking beyond chemistry and energy). In one example, he describes research where rats were measured to see how long it would take them to learn a task. Results were measured over successive generations to find that later generations learned the same task more quickly. This suggests some form of genetic memory. But the results were more profound than that: later generations of rats that had not been trained on the task also began learning the task more quickly, so now we have to consider that information was somehow learned and shared among the rats as a whole, entirely apart from biology.[2] Sheldrake extends this initial example by saying that “if rats of a particular breed learn a new trick in Harvard, then rats of that breed should be able to learn the same trick faster all over the world, say in Edinburgh and Melbourne. There is already evidence from laboratory experiments that this actually happens.”[3]

Moving on to the processes directly inside our bodies, Sheldrake points out that we know what genes do – they tell the body which proteins to make. But here’s what is odd: the same genes are used in many different species, yet they produce different proteins depending on the species. So something must be instructing the gene.

Sheldrake also says, “Just making the right proteins at the right times cannot explain the complex skeletons of such structures without many other forces coming into play, including the organizing activity of cell membranes and microtubules. … Microtubules … crystallize in one part of the cell rather than another, even though the subunits from which they are made are present throughout the cell.”[4] So, the same subunits are found throughout the cell but they’re doing different things. Why? Because, in Sheldrake’s terms, “other forces” are coming into play.

In short, chemistry and energy alone cannot explain the facts of biology. And this is the key. Our bodies must be provided with enough energy to operate (we must “charge the body’s battery”), and we’ll discuss that in the next chapter. But this energy must also be used correctly within the body. This drives efficiency and accuracy in the body’s chemistry, keeping us healthy and well powered. This process relies on a hidden control system that we’ll discuss in later chapters.

As I worked with Peter Fraser, I learned about the mysteries of this control system – not only to see where it needed support, but also how to provide that support. The answer wasn’t pharmaceutical medicine. It wasn’t nutrition, it wasn’t an herb, and it wasn’t homeopathy. It was one of the earliest remedies in a line we now call Infoceuticals. We’ll talk about these in later chapters and how I helped Peter to radically improve our approach to them. But this is what Peter provided me shortly after we met in California.

While countless other approaches had failed me, in a matter of days of taking this new type of remedy, I began to see dramatic shifts in my health. It convinced me that bioenergetics was more than just theory; that it represented the future of how people would support the body in its miraculous ability to heal. Why simply suppress symptoms when there are options to truly recover? In the six months that followed, my health and energy levels continued to improve. I was no longer confined to my bed, and never would be again thanks to bioenergetics.

Nearly two decades later, having grown a substantial business to share these secrets and successes with thousands of health practitioners and improve the lives of countless clients, I’ve also had the opportunity to meet with the brightest minds in wellness. This group includes many scientists and experts who understand that biology goes well beyond biochemistry, that it is based in quantum phenomena or energy events that drive everything else. But this group also includes many other experts in the worlds of nutrition, biohacking, mind-body wellness, and much more. This exposure has helped me to refine our theory, to better understand how all these approaches fit together holistically, combining the physics and the chemistry of the body as well as the emotional components that have such a profound effect.

If I’d had all this knowledge when I was trying to recover, I’m confident I’d have seen even better and faster results. Applying this holistic approach over the years allowed me to continue building energy, and today I engage in exercise and sports every day. Now I have the opportunity to share this system with you, and it’s all built around a two-pronged approach:

We’ll explore both of these ideas in the pages ahead, and we’ll begin with steps you can start to take right away to recharge your energy and begin living life to its fullest once more.

I have a client who is legally blind because, when she was born, they didn’t know to cover her eyes to protect them from building up scar tissue from the oxygen exposure in the incubator following emergency heart surgery. Her sight decreased over the years and she has severe cataracts and a strong sensitivity to light. She had to wear dark sunglasses when going outside in the sunlight. After being on Infoceuticals, she is able to go outside without wearing them.

You can read the rest of this book by choosing chapters in our navigation under Books.

Or you can download this book in its entirely as a PDF by creating a FREE account with us. Simply visit:

After you sign up for free, you will find it under "Self Health" > "Books". This account also gives you free access to films, recipes, imprinted music, and more! We hope you enjoy exploring this world of bioenergetics.

See how the BioEnergetiX WellNES System can deliver groundbreaking insights on your clients.

Health practitioners, request a 1 on 1 consultation with one of our experienced Bioenergetic Consultants.